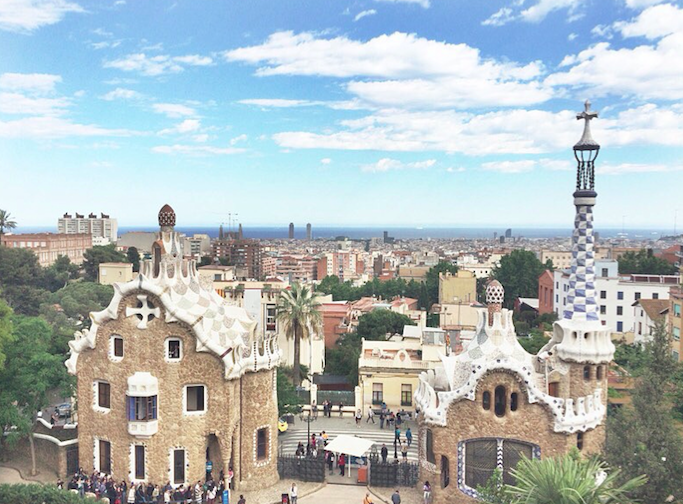 On our first full day in Spain, we were finding it hard to leave the beds that we had so thankfully fallen into the night before. Though many of us had already slept upwards of ten hours, it felt like meager compensation for the jet lag. Indeed, it proved too much for a few of our party who missed their alarms and thus missed breakfast. Despite the lingering exhaustion, there was still excitement for the day’s planned activities. On the docket was our first trip to the mosque here in Granada and our first walking tour with Nacho around the city’s Moorish section.

Our visit to the beautiful mosque atop the hill offered us bubbling fountains, lush gardens, and sweeping views of Alhambra and the rest of Granada. In the shade of the garden, we first met with Munira, a Muslim convert originally from the United States who stayed in Granada after finding love, religion, and community. The picture she painted for us of Islam was one different from its portrayal in the American media; it was a lifestyle of compassion and tolerance, intent and spirituality. She spoke on how Islam empowered her rather than oppressed her as a woman and described a faith of change and choices. While listening to her speak, I was sincerely moved and awed, both by her story and by a vision of Islam as she had experienced it.

In order to gain our specially allowed admittance into the sacred interior of the mosque, it was necessary for the entire group to wear modest attire, including long sleeves and headscarves for the ladies. Though this was something we were excited to experience, we all had to grin and bare the extra cloth under the bright sun and 97 degree heat. As we bade goodbye to Munira (with promises to visit her leather goods store before departing Granada), we were introduced to Nacho, a local tour guide whose exuberant hand gestures and lilting voice charmed us to the Moorish section of the city. Through narrow cobblestone streets and staircases (that I became the first person to fall down), we traced centuries of history in ancient city walls, remnants of water mills, and secretive Carmen garden estates behind whitewashed walls. We considered buying a few of the various houses that were for sale and then balked as Nacho told us that they would sell for between 1-3 million euros. (After all, you pay for the history and pay for the views!). We navigated the labyrinth of narrow (and thankfully shady) alleyways to a convent where, after a brief conversation with a cloistered nun of 72 years of service, we purchased what we affectionately referred to as “nun cookies”. (As one can imagine, this prompted many puns: “How many cookies are left?” “Nun.”)

Our final stop of the day was at the remains of an ancient Arabic bathhouse where, after enviously envisioning magnificently tiled bathrooms filed with warm, hot, and cold-water baths and steamy massages, we were informed that the modern equivalent of the ancient bathhouse experience was open in the city. (Needless to say, several of us have a reservation for some serious historical pampering on Sunday.)

Only day two and already the entire Dialogue were wondering how anyone managed to get anything done without a siesta. For each of us, a siesta in the afternoon meant something different. Some made their way back to the pool or their beds, but a handful of us found a lazy lunch of tapas and a late-afternoon gelato and settled in to do the first of many sketches assigned. Despite many initial uncertainties, we all agreed that it ended up being a practice we enjoyed. Personally, after a day filled with so much activity and information, sitting in the breeze and soft sunshine of a riverside park to sketch felt like a welcome respite. The quiet, the stillness, the singular focus felt refreshing and helped to gather my thoughts before our evening class.

After such a busy day, it was easy to forget that we have only been in the city for 36 hours. Already the marble sidewalks and tree-lined streets feel familiar and comfortable, the other students feel like friends and family. No matter how much fun we were having over dinner outside in the evening air, the lingering jet lag makes its will known and, one-by-one, we find ourselves each surrendering to the last (and perhaps most important) of our current needs: sleep.