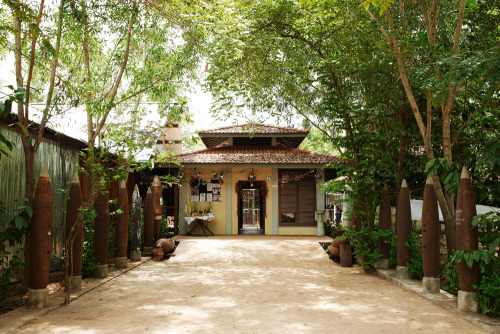 Cambodia is a country in Southeast Asia that shares borders with Vietnam, Laos, and Thailand. The climate there is divided into two seasons: rain, humidity, winds, and sun from November to March, and an even more dramatic incline from April to October. Regardless of the season, tourists and locals alike would agree, it is almost always too hot. The country was a culturally religious center long ago, attracting Buddhist and Hindu pilgrims to its prasaats (“temples”). Many of those magnificent temples still stand today. Angkor Wat, for example, is considered a world wonder. Its agriculture is one of the most influential in the world. Along with three other countries, Cambodia provides most of the world’s supply of rice. The Kampot peppercorn, a spice marked at $15 per kilo (about seven times more valuable than silver), is grown exclusively in Kampot, Cambodia, a section of lash flatland surrounded by mountains. Kampot pepper purchases are accompanied by a Protected Geographical Indicator – the same certification that validate the authenticity of regional produce like champagne. Because of the accessibility of the local spices, I can safely say that I’ve never had better curry, stew, amok, or salted fish.  Off the coasts are islands like Kohrong with relaxing bungalows, music, and parties. With welcoming people, interesting history, and exquisite spices and cooking, it’s a genuinely wonderful place to not only visit, but to live as a student on co-op.

As much as I wish it was the case, that picture of Cambodia is incomplete. On closer inspection of the temple stone carvings, there are bullet holes dotting the walls. Cambodia has not always been peaceful and once suffered from civil war, carpet bombing, and Khmer Rouge, the communist led genocide.  Some of its citizens remember those days and have tattoos on their chests that are said to increase their likelihood of dodging bullets. Other legacies of those times include killing fields and concentration camps – both of which now serve as popular tourist attractions –  and armed explosives – landmines, bombs, missiles, and grenades, buried beneath the ground.  My co-op aimed to prevent casualties caused by live explosives that were left behind from wars thirty years ago.

Every day an average individual wakes up, brushes his teeth, goes to work, and comes home for leisure, food, and sleep. Generally speaking, the same process occurs day in and out for someone in Cambodia.  However, there is a caveat to this sameness. At a moment’s notice, an unfortunate soul could lose a couple of limbs in the blink of an eye, because a landmine was stepped on. Livestock wander off the beaten path to graze and next, bang, the herd is one head short. Landmines and other live explosives (UXO) were used extensively to deny territory to enemies. Today they can be found all over Cambodia – scattered in the jungles, next to an elementary school, behind a village hospital, or possibly along the dusty roadside people cycle down to get to work every day. Since these explosives remain armed until they’re triggered, destroyed, or disassembled,  they remain as a threat today.

At the Landmine Relief Fund, I went with the organization’s EOD teams and potential donors to showcase the process through which experts sweep and dispose of landmines. I videotaped and photographed this process to help raise awareness of the dangers these landmines still present. Also, I rotated around the organization doing many things from translating exhibitions, curating museums, fundraising, grant writing, managing subscriptions and our newsletter, and briefly teaching Chinese at a school for children affected by landmines.

Each UXO disposed of during my time at Landmine Relief Fund, saved a Cambodian life.  In an estimated 150 years, Cambodia will be free of landmines: a statistic I can proudly stand by, after my time on co-op in Cambodia.  Regardless of how daunting that sounds, every mine counts. As the Landmine Relief Fund’s slogan goes, “One mine, One life.”