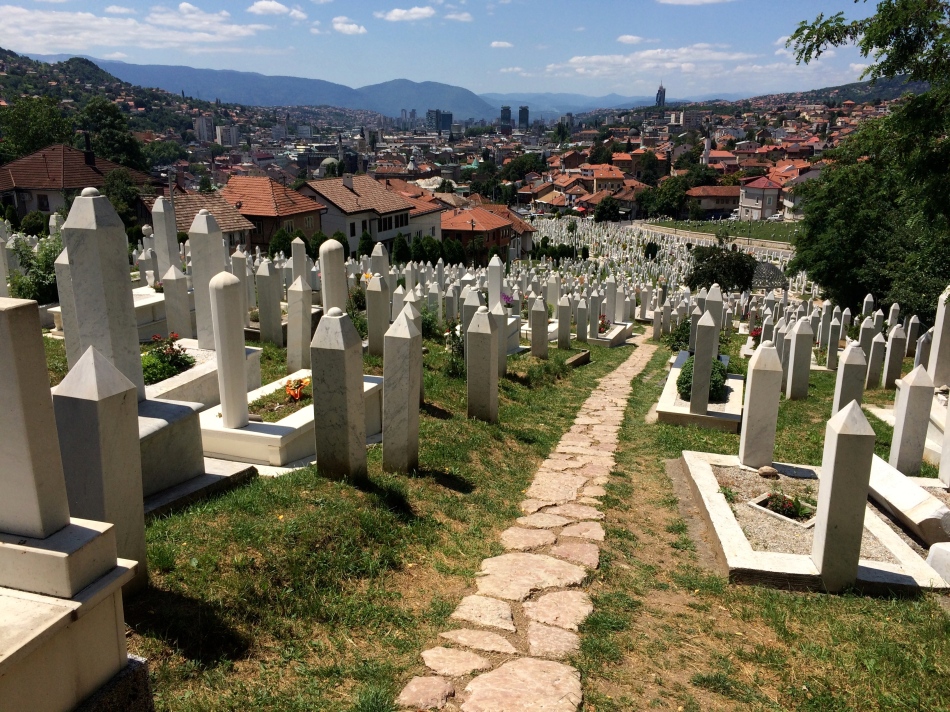 Sarajevo, the heart of the Balkan country of Bosnia and Herzegovina, is unique in so many different ways. For some, it is unique as the crossroads between two old and powerful empires- the Ottoman and the Austro-Hungarian- whose influence lasts to this day in architecture of the city: some buildings grand, European, Western, others exotic, Turkish, Eastern. To others, it is unique as a garden of religion, the “Jerusalem of Europe”, one of the few places in the world where a Catholic Church, and Orthodox Cathedral, a Muslim Mosque and a Jewish Synagogue- all ancient, all possessing their own place in the culture of the city- lie within a five minute’s walk from one another. For others, it is unique for its significance in the wars of the 20th Century, being both the birthplace of one of the century’s first wars and the site of one of its last.

And still, for a fourth party, it is a city unique for something much, much simpler: its light. I have been to Antibes and Paris, where artists once flocked to capture the late afternoon onto canvas. I have seen sun rise upon the coasts of Italy, and there is even something to be said about the dark sunsets of Boston’s skies in winter, but none compare to the Golden Hour in Sarajevo. There is something about the way dusk comes to this city, nestled between the great green mountains of the Balkans, that brings a sense of history, a touch of mystery, the sensation that comes only from leafing through dusty, long-forgotten books in the furthest corner of a library. It is the wash of orange against the Ottoman streets, the way the last rays of sunlight touch the tops minarets of the mosques that rise above the skyline, the hazy glow that seems to settle onto the cafes like a soft blanket as Bosniaks, Serbs, and Croats alike mingle and drink Bosnian coffee, watching together as the light leaves the day in a calm serenity that makes it seem that the War was a hundred years ago, not twenty.

The War. It is the shadow of that very word that lingers still onto this city, that lingers always back in one’s mind as they walk down its streets come day’s end. Here, bullet scars still dot the sides of buildings; there, a graveyard cascades down the side of a hill, the simple dates on the smooth surface of the markers saying more than words ever could: ’92, ’93, ’94. Stop for a moment on a bridge that spans the river between your hotel and your favorite café, and you’ll find a memorial to two young lovers shot down while trying to escape the siege of the city. Take time to talk to some of the city’s older residents, those to whom to the War still remains a distinct memory rather than distant history, and you’ll find a hint of the sadness that seeps into every brick, that comes strongest when the golden light falls upon the city: of friends torn apart by the lines of ethnicity or religion, of loved ones lost, of the sad reality that this city, this country, has forever become associated with those secret, horrible words: Ethnic Cleansing. Genocide.

Too often do we, as students of Political Science and International Affairs, see conflict as a thing to be analyzed, to be teased over with textbooks, lectures and group discussions, to debate and question but never to know in the way those who suffered it know. We sit in classrooms in Boston, or Paris or London, and relegate the lives, and struggles, and sadness of an entire nation to mere case studies. We wonder aloud what school of thought best explains the outcome of a conflict that affected the lives of millions without pausing, even for just a moment, to consider the humanity of the people who lie on the pages of our books as mere numbers. There is a crime in that, a crime that perhaps lies at the heart of the cynicism that seems to define the world events that flicker across our newsfeeds.

If there is anything to be said of Dialogue, it is in its reflection of the nature of the word itself: the act of talking to those who lived a life a world away from our own, who we too often only study within the confines of a classroom. Of understanding conflict not as an unfortunate aspect of political thought, but as a horror that that taints our history, that divides peoples and destroys families, friendships and lives.

Dialogue is more than just traveling to another country and seeing another culture. It is allowing oneself the dignity to see others as human beings, to hear their stories and look into their eyes and see the pain that lies there still. To witness a procession for the unidentified dead and watch as, silently, hundreds gather in silent prayer and lift their hands to those who have departed. To walk the paths of Srebrenica and take in what the word thousands truly means.

It is, above all else, watching the light slowly fall onto the streets of Sarajevo, and realizing the weight and sadness that lies behind every sunset, every evening in which the orange, hazy blanket of dusk settles onto the city in a way that cannot be found anywhere else in the world.