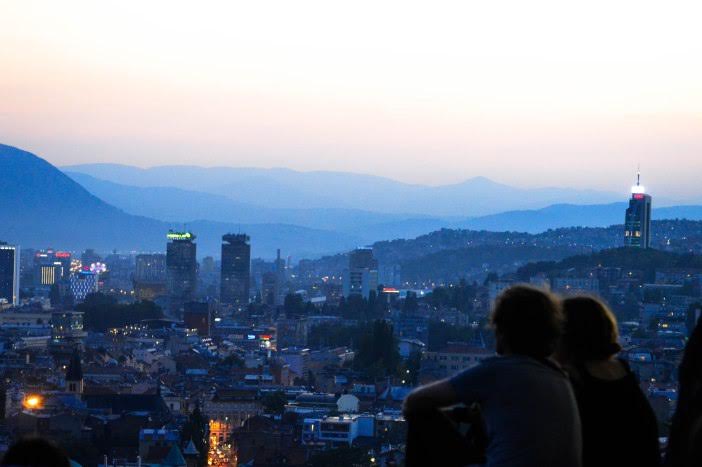 There’s a legend surrounding the Ottoman fountain in Baščaršija, the Turkish old town that is the heart of Sarajevo: that if you drink from the fountain’s fresh, mountain-fed waters, then one day you will return. I always expected to come back to this city, but never this soon.

When I returned to Sarajevo this past July for a six-month journalism co-op, barely a year had passed since I first set foot in Bosnia as part of Northeastern’s Balkans Dialogue of Civilizations. Yet since that summer, our world had changed to be almost unrecognizable with terrorist attacks in Paris, Brussels, Orlando, Ankara and Beirut, the Syrian Refugee Crisis, the summer coup attempt in Turkey and the rise of anti-refugee and anti-Muslim sentiments in Europe and the United States. In just 12 months, our world had seemed to grow more dangerous, more cynical and more afraid, and as the world changed, I had changed as well.

By the time my plane landed in Sarajevo International Airport, I found myself with another year of classes under my belt, two new languages that I had begun to learn and experiences traveling in an entirely different part of the world, Jordan and the Middle East, still fresh in my mind. Although the sights and sounds streets of the streets of Sarajevo were much like I had remembered, the city was in many ways less familiar than it should have been now that I was looking at it with a slightly older, slightly wiser, slightly less wide-eyed gaze.

Just like many students’ first Dialogue of Civilizations, my travels to the Balkans during summer 2015 was one of the first times I had ever spent any real time abroad. The purpose of that trip was not to learn a language or a culture, but to study and understand a conflict — the Bosnian Civil War, one of the worst wars in Europe since World War II.

In the 1990s, Sarajevo served as the heart of this war, which pitted neighbor against neighbor, religion against religion and ethnic group against ethnic group. The city saw not only one of the longest and most brutal sieges in modern history, but also systematic campaigns of ethnic cleansing and genocide.

I still keep several positive memories from that dialogue of playing cards in a cafe by the river, seeing the orange haze of sunset fall like a blanket onto the city from the top of the Yellow Fortress, interacting with many people of another faith for the first time and hearing a language spoken around me that was radically dissimilar to any I had ever heard before.

But I have memories too of walking in the footsteps of genocide. Memories of discussing the hard topics of conflict, ethnic cleansing and war crimes with people who had experienced those very things personally, barely 20 years before. Memories of feeling a particular sadness lingering behind the surface of a city that I have never felt before or since.

Investigative Journalism, the focus of my co-op, is not international affairs, political science, or conflict studies, and my return to Sarajevo was concerned more with the realities of government corruption and organized crime that affect this part of Europe today than the conflicts of the past. But, always, the war was still there.

In the little time I had off work, I often found myself taking long walks along the river, where on Sundays the road was closed to cars and children came out in bicycles, lovers cuddled on park benches and old ladies sat gossiping in cafes. With the fall leaves dusting the sidewalk, it was easy to believe that the country had finally moved on from the war and that things had fully healed. But, always, there were signs to show otherwise: the collapsed buildings along the riverside that had never been fully repaired, the nationalistic politics that seemed to grind any progress toward true reconciliation to a standstill, the bullet holes that traced lines over the house that I returned to every night.

In the evenings, while sitting on my terrace and watching dusk fall upon the city, I would find myself thinking about the people who might have lived in the same house as I while bullets grazed its walls. I would think about my Bosnian friend from work, who still holds a newspaper clipping showing him as a four-year-old child clutching a tiny penguin-shaped backpack, full of emergency supplies his mother made him carry in case they were ever separated. I would think of the war veterans cafe next door to my office, and the things the people there have seen and perhaps themselves had done.

And in those moments, I would think of Damascus, Aleppo, Mosul, Yemen and Libya. It’s hard to believe now, with the ubiquity of these wars on our newsfeeds, but during my first summer in Bosnia, the realities of those very conflicts had yet to fully come to light. Russia had yet to begin its bombing campaign in Syria, ISIS-inspired terrorism had yet to strike Paris, Nice, Beirut or Istanbul. The Syrian Refugee crisis had yet the hit its fever pitch, and the European Union had yet to close its borders against the waves of refugees from the Middle East.

To look at bullet scars on a building or walk between gravestones bearing the same four years of death over and over means one thing when studying a conflict 20 years gone. It means something entirely different with the realization that what the people of Bosnia went through in the ‘90s, Syrians, Yemenis, Libyans and Iraqis are today themselves enduring.

Sarajevo has not healed from its own four-year siege, and Bosnia has not yet healed from the war. It takes more than 20 years for those scars to mend, for people to reconcile, for forgiveness and peace to take root. And whenever the Syrian Civil War ends, whenever Libya repairs itself, it will take more than 20 years, or 30 or even 50, for those nations to find their own resolution. Much changes in a year, and what I have found upon returning to Sarajevo is how eerily similar a conflict that we as an international community should have learned from resembles the wars of today.

But there is this as well: once a year, a film festival opens in Sarajevo, the largest of its kind in all of southeastern Europe. The festival was born from the days of the war, when several young people, braving sniper fire and staving off siege-induced hunger, gathered together in a basement bunker to bring joy, warmth and hope to thousands who for years had found themselves trapped within the city center.

A quote from one of those founders still sticks with me: “During those nights, we were doing more than just surviving. For the first time in years, we were living.”

Even in the darkest of places, people manage not just to survive, but to find small and beautiful moments worth living for. That says something, and as the months passed by in Bosnia, the more I saw that despite the war’s lingering effects, people were in their own ways moving on. People were healing, even if all the wounds hadn’t yet mended.

There is hope in that, and I try to keep that in mind as yet another city, yet another country, suffers the same fate as Sarajevo once endured.