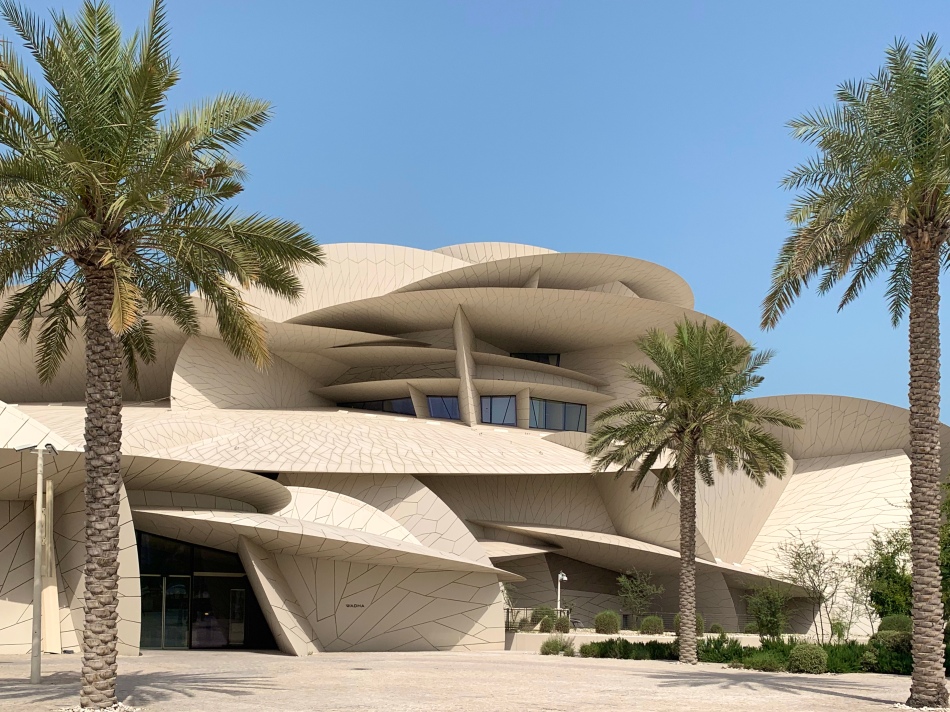 Kaleidoscopic city lights dotted the skyline as we drove into the city from the airport, the warm winds welcoming us inward. Although my eyes were heavy with exhaustion, I was eager for every drop of beauty I could capture from my bus window. I had just arrived in Doha, Qatar, excited for the wonders that were ahead of me.

I spent a week in Doha at the end of February as part of the Qatar Exchange Fellowship, organized by the National Council on U.S-Arab Relations (NCUSAR), in conjunction with the Qatari Ministry of Foreign Affairs. I first connected with NCUSAR my freshman year at Northeastern, when I joined the International Relations Council and participated in my first Model Arab League (MAL) conference. I entered the activity with limited knowledge of Arab politics, but soon expanded my understanding through research and debate at conferences. It was due to my dedication that I was nominated to attend the Fellowship experience, giving me the opportunity to make my first visit to the Middle East.

During our week-long stay, we had meetings with state officials and excursions to learn about Qatari culture. Every experience was engaging in a different manner, as each allowed us to examine a new area of Qatari politics and society. The trip itself took place during a pivotal point of international diplomacy – after 18 months of negotiations, the United States and the Taliban finally signed a peace deal in Doha, in a hotel just a mile away. The recency of this event meant that our meetings were especially engaging and we received insight on exactly how states work to achieve peace through deliberations.

Amidst our meetings, there were also visits to Qatari museums, schools and other institutions of remarkable achievement. On our first full day in Doha, we visited the National Museum of Qatar – spectacular both in its extensive historical connections and its dazzling architecture – a geometric masterpiece inspired by desert rose formations. It was here that I learned about the history of Qatar within the Arabian Gulfand the vibrant culture and heritage of the Qatari people. I had the opportunity to visit a magnificent institution highlighting the success of Qatar today, its beauty glistening with the same luster as the pearls that built the Qatari economy many decades ago.

At another point in our trip, we took an excursion to Education City, about fifteen minutes outside of Doha. This portion of the country is home to campuses of eight foreign universities, Hamad Bin Khalifa University, several K-12 academies, research centers and my personal favorite, the Qatar National Library (QNL). As a child, my parents had to drag me out of bookstores and libraries; too enthralled by the wealth of knowledge surrounding me, I would try to sneak away to spend the whole day reading. At the QNL, I was enveloped by the hundreds upon thousands of books – as well as the historical maps and photographs – all daring me to escape from the group for vigorous study. This too was a glorious insight of the country, as it illustrated the importance the Qatari people place on education.

For our final day in Qatar, the group took an excursion out of the city for an enthralling adventure across the peninsula. Three drivers escorted our group south towards the expansive desert, though before traveling further, we took a brief detour to visit some local fauna. There were ten camels waiting for us for a short ride and a majestic falcon reflective of Qatari heritage. We then said goodbye to our animal friends and drove off the main roads into the rolling dunes. Our driver zigzagged across the sand, darting around the dunes as we drank in the majestic landscape around us. My heart raced as we skidded about, jolting us around within a euphoric rush of joy and enchantment. We progressed further and further through the sands, until finally arriving at a shallow beach, the warm sun slowly setting around us. The Islamic call to prayer rang out in the distance as I waded into the waters, absorbing the landscape around me. On the other side of the water, a neighboring land emerged: Saudi Arabia.

I walked out of the cool waters back into the sands. At this point, the sun had fully set, and my time in Qatar was sadly  coming to an end. During my first trip to the Middle East, I had the opportunity to expand my understanding of Qatari culture and politics, and I will be forever grateful for the kindness given by the people who assisted me during this experience. As I flew out of the country hours later, I spotted The Pearl-Qatar from my window, an artificial island constructed right outside Doha. And in that moment, I thought back to the pearls of diplomacy, culture, and beauty that I had witnessed during my short visit, a portion of the radiant wonders flourishing within the state of Qatar.